Alcohol has been a part of my life for as long as I can remember. As children, my brother and I would grab beers out of the fridge for our Dad, or witness our Grandfather stirring his screwdrivers with his index finger. Drinking was normal, for the men. For the life of me, I can’t remember my Grammie consuming alcohol while we were kids, and I know for a fact we never saw our mom drunk, or even drink anything for that matter until we were adults. In 9 months I’ll be celebrating my 10-year Soberversary. From now until then, I plan on writing a list of stories about myself, during my drinking days. I quit in 2011 when I was 29 years old. This means I have over ten years of stories to share. I’ll share excerpts here and there if you like. The title?

I have several stories that pop up from time to time, but I also know that my memory is a little fuzzy here and there, mostly everywhere though. If you have any specific memories, please don’t hesitate to reach out and help me remember. I’ll need all the help I can get. Below is a taste.

I share this photo because it was during this trip to Seattle that my grandparents saw me really drunk for the first time. They provided me with a 5th of whiskey and I was told “Now, this has to last the entire trip.” It did not last more than two days. My brother was given a run of the entire stock of fancy beer. If I remember right, none of them were really all that tasty to him. That first night I polished off more than half of that 5th. We were out on the back patio drinking and smoking cigarettes, something my Grammie called “wasting time”. Towards the end of the night, I was getting loud, and if you know me, I don’t get loud. Grandpa called for Grammie, “come have a look at YOUR grandson”. I think Grandpa may have been trying to move the attention off of himself since he was bumming smokes from all of us during that trip. For the majority of the week, I had to drink screwdrivers, along with my grandpa, because I ran out of whiskey. I don’t think he minded though since I mixed them just strong enough for the both of us. I believe my brother and I appear red-faced in some of these photos, due to us being hungover. This trip we also introduced our Grandpa to the show “Trick my Truck”. Without question, every episode ended with some ole redneck exclaiming “Man, thas jus owesum!”, which is something we had are Grandpa repeating for the rest of the day.

This is a good story. Not all of them are, but that’s okay.

P.S. Don’t mind the popped collar. He eventually grew out of that.

This site uses Akismet to reduce spam. Learn how your comment data is processed. 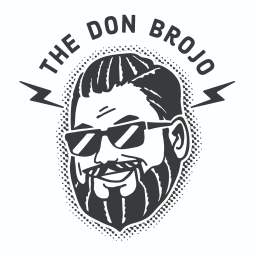 Today's bed head loves you very, very much.
I'll let Elizabeth illustrate the kind of weekend we've had.
First day in a while that I didn't wear a hat. This is what my hair does naturally and I think it gives me a 60's vibe. Love it.
This car passed me on the way home from work today. Now I know what it's like to be passed by a car that's 30 years older than mine.
How close you think this is? Not bad, huh?
Daddy and Miss Elizabeth enjoying the sunshine today.

All pictures not provided by The Don BroJo come from the free image site Pixabay.com